Japan fascinates – not only me, but also the many foreigners who live here. The main reason for this seems to be the incredible kindness and calmness of the Japanese, which contribute to a very stress-free life. Looking at Japanese working environment however gives a very opposite impression and some traditions like mandatory drinking with one’s boss and coworkers after work seems very questionable to me. Luckily, I am in the position of having a lot of free time to explore the country, which I enjoy very much. In the following, I would like to give an insight into some of my recent experiences, including many beautiful pictures, as Japan really offers a splendid setting for photography!

On hina matsuri, the girls’ day, dolls in colourful dresses are displayed in shrines and Japanese homes. They represent the imperial family and court. The kimono worn by the performer who is impersonating the empress during the shrine festival consists of twelve silk layers.

My German friend Mattias, who is currently living in South Korea for an internship, visited me in the beginning of March. Together, we spent one weekend sightseeing in Kyoto. It has been very interesting to discuss and to compare our experiences with Japan and Korea. From the culinary point of view, Japan carried off the victory. In nijo-jo castle, we enjoyed beautiful wall paintings of pine trees, cherry blossom, birds and tigers, which are often painted on raw wood. Like any other Japanese park, the castle’s garden is well-kept and neatly trimmed.

In the north of Kyoto, we visited “Japan’s most beautiful building”: The golden pavilion is located on the temple grounds of kinkaku-ji. The roof is inhabited by a golden phoenix with widely spread wings.

During a weekend in Kyoto, you certainly shouldn’t miss fushimi inari, a shrine for the Shinto goddess of rice and food. We took the one-hour walk up the hill in the early morning in order to avoid the incoming masses of visitors. The walk leads through a countless number of orange torii which have been donated by families or companies. The cost of donating a new torii is about 1500-10000€, depending on its size.

Nobukatsu and Arisa from Rotaract invited me to spend a very special day at a shrine festival in Suita. After improving my calligraphy skills, learning my name in Kanji and wood carving a cat-shaped coaster, I was allowed to slip into the role of a Miko together with a Japanese visitor. Miko are young women who work at the shrine and practice both religious and practical tasks.

Two very nice ladies clothed us in traditional garments and dressed up our hair. Mikos are not allowed to wear any personal juwelery. After a short acclimatisation, we were introduced into the various tasks that come with being a Miko:

We were taught how to wash one’s hands and mouth after entering the shrine and how to dry it with specially folded paper towels. In the shrine, twigs of tamagushi decorated with paper elements are sacrificed to the gods. The shrine grounds have to be kept clean, and the ritual of pouring sake into for example wedding guests’ glasses follows strict rules.

Trying our best to remember all procedures including bowing and clapping, we were allowed to sacrifice the decorated twigs to the gods during a ceremony with a Shinto priest inside the shrine. This has been a very exciting experience! My cordial thanks goes to Nobukatsu and Arisa for this special day!

Emerging from the traditional world of Shinto, the day continued to be interesting! I visited Nippombashi Street Festa, the annual cosplay festival of Osaka. It featured amazing costumes of all kind, which I was not able to recognize as I am still very inexperienced concerning Anime. Maybe the time has come to open up to this side of Japanese culture…

I spent a lovely Sunday with Mr and Mrs Kitano, who I already had met during the Rotarians’s visit in Grünwald last fall. They invited me to their home for tea, and I found it very interesting to see a Japanese house from the inside. We then went to see the Minō waterfall. After a one-hour walk, we enjoyed a fantastic lunch menu at a Kayseki restaurant. Sesame tofu, baby bamboo, tuna sashimi, scallop, tempura, octopus – it was so delicious! We were talking in both English and Japanese, which gave me a good opportunity to practice and improve my Japanese skills. I had a very nice and very interesting day, thank you so much! 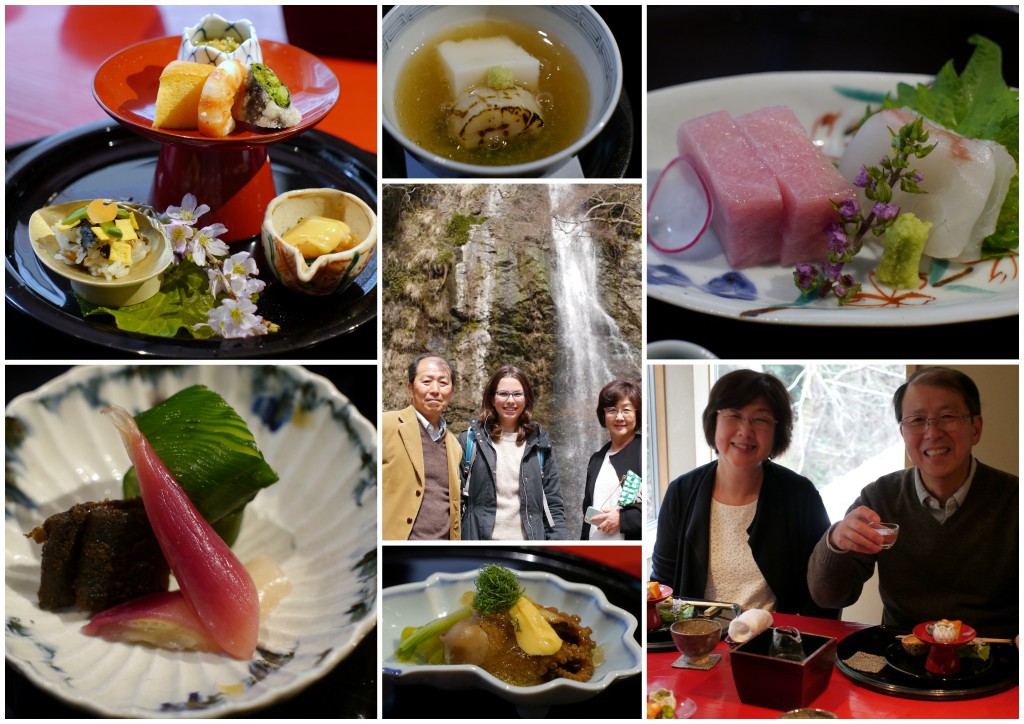