Like in Germany, beer seems to be one of the most popular drinks in Japan. When looking out of my window I can see one of Asahi’s breweries, one of the largest beer producers in Japan. Therefore, I was keen to get a guided tour through the facilities. Japan is a country of high
expectations which is why Asahi brought German experts to their facilities to check their possibilities and the quality of the ingredients. The facilities of Asahi are characterised by efficiency, cleanness and modern technology which are aspects that can be found in the
Japanese mentality as well. I got accompanied by Chinami and we went for sushi afterwards before heading towards the famous Expo park of the year 1970. The park is huge, well refined and especially the Japanese garden is worth a visit.

As part of the cooperation with the Goethe Institution Osaka I spent one day as an actor for the yearly produced advertisement videos. During the day I was able to get to know new people and friendships developed. While doing the clips I figured out that learning a foreign language is not common in Japan which is why a lot of political and cooperational Engagement is necessary to introduce the advantages of a new language to the people. Furthermore, I was able to learn a lot about the work environment in Japan as well as its influence on the travel and vacation habits of Japanese people. The established structures have a significant influence on how the locals address holidays and their setting towards foreign nationalities.

When asking locals about their favourite season, most of them mention fall even still ahead of the cherry blossom. In order to experience the colourful event, I spent the three days in Kyoto and visited several gardens and parks. Even though not all leaves have changed in colour, yet it is absolutely amazing how colourful and different spring is in Japan in comparison to Europe. This in mainly caused by the different temperatures here as well as different type of trees and plants in Japan. In my opinion, the local maple looks the best when lit by the sun.
The locations which I liked the most where Daiho-ji, Kodai-ji, the Imperial Palace, Heian-Shrine and the silver temple. I also recognised the increase number of tourists in comparison to earlier visits of Kyoto. I can understand why some Japanese people do not like all the tourists
since several sightseeing locations announced admission control and preregistration which primarily affects the locals who are used to have free access. It also seems like spring is a time where Japanese people take especially care of their culture and invite for evening activities and celebrate this time of the year.

Another special event was the invitation of Mr. Okamoto and his wife for dinner together with the current German general consul of Osaka, Dr. Köhler, and the former ambassador of Japan, Mr Shinyo. During this evening I picked up a lot on the current political environment in Japan,
the importance of Germany in Europe and the world economy as well as on topics which will influence daily life in the future. Additionally, I was pleased about the Interest of the guests on my path of life and my goals as well as I got interesting recommendations for the upcoming
application period to find a graduate job. After a multi course dinner we participated in a traditional tea ceremony which offered a lot of insights about the Japanese culture. I also recognised several aspects during the ceremony which can be found in daily life as well. For
example, the alternate use of very sweet Japanese sweets followed by bitter Japanese green matcha tea supported my opinion of Japan being the country of contrasts.

Mrs. Wada, Alexander and Ulrich I went for a daytrip to Koyasan, a very traditional and historically important village in the mountains. Together we enjoyed impressive graveyards, temples and museums. Especially graves for employees, sponsored by companies were interesting since they reflect the traditional, lifelong loyalty of workers towards their company. Being accompanied by Mrs. Wada was significant since she had a lot of Background information which she shared with us. The following day I got the possibility to hike up Mount Rokko, lose to Kobe, with a group of seven locals. While hiking for several hours I gained interesting insights in the Japanese life as well as discuss interesting topics. Especially interesting was the fact that at traditional weddings people pay an “entrance fee” in order to support the couple financially. After the
hike we went to the close by Onsen town called Arima, which is one of the oldest of its kind. Onsen is a traditional and influential aspect of the Japanese culture since it is strongly connected to the development of the Japanese country as well as shapes the culture since
decades. In the evening I was invited to join dinner at Mrs. Ikawa’s house together with the fellow group members. We had a lot of fun and used the day to share each other’s culture and learn from each other.

As part of the cooperation with the university of Kyoto I had the pleasure to participate in a traditional tea ceremony again. The strict rules of this ceremony ask for several years of training and a lot of discipline. The mother of Dr. Aoji is doing so since many years and teaches
this traditional event to young people. Other than at Mr. Okamoto’s place we had to sit down in the traditional “Seiza” which is especially exhausting for European people since we are not used to this way of sitting down. However, it was a great pleasure to join this ritual once again
since it is a good opportunity to get to know the Japanese culture very well. The ritual reflects the characteristics of the Japanese society mentioned in earlier reports like accuracy, discipline and integration of traditions in daily life. Afterwards, we enjoyed a very delicious
dinner with typical food. I highly appreciate t be that close to the Japanese lifestyle to Gather as many impressions as possible by myself. In general, I got to know Japanese people as being very hospitably as well as are open minded to allow other nations to enjoy their cultural
heritage. 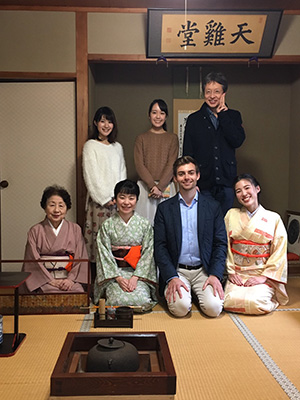