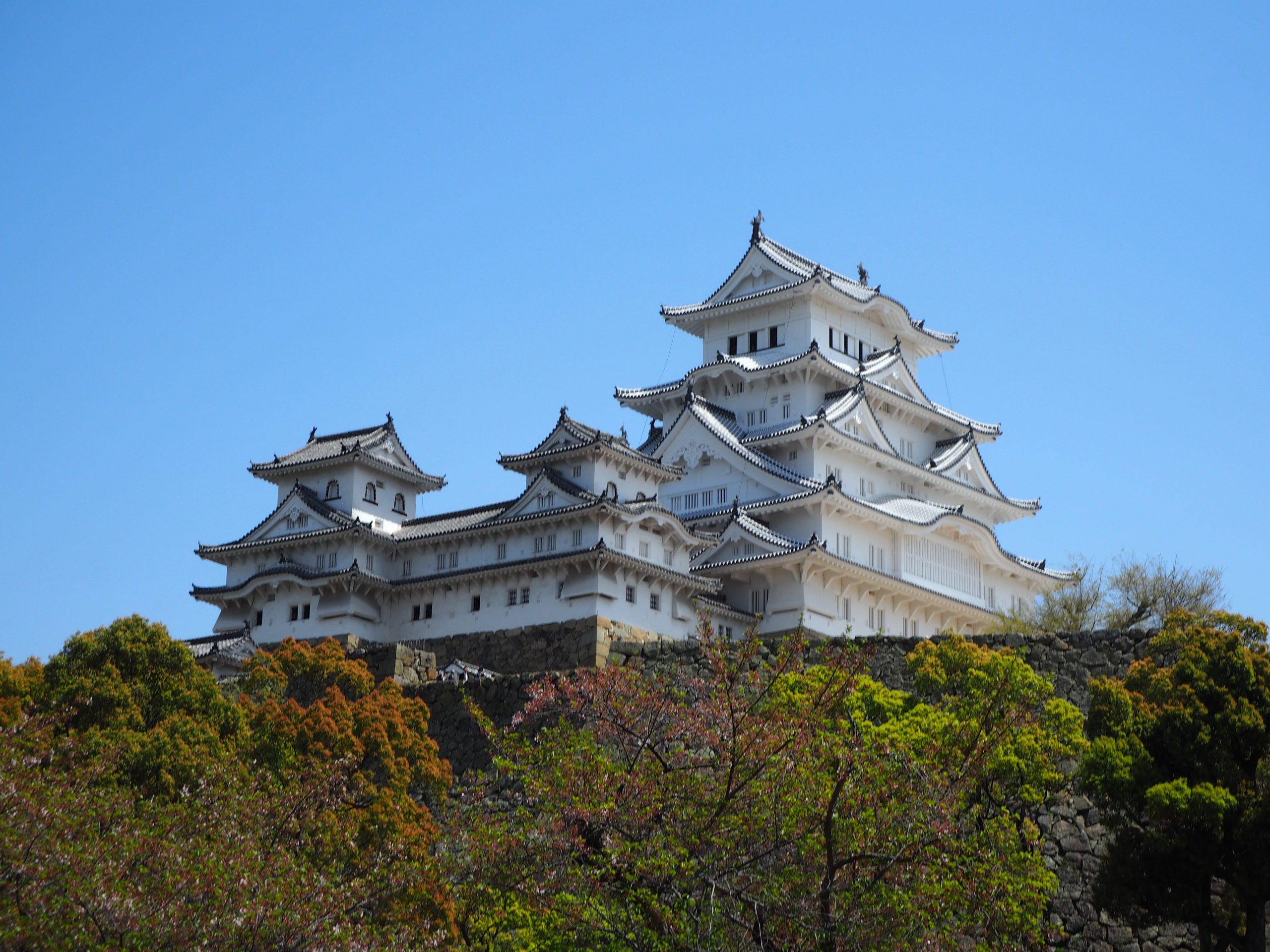 One month… For one month I am already in the land of the rising sun! It is unbelievable, how fast the first third of my stay in Japan passed by. From my own experience I would say, time moves the faster, the more you experience. And one thing is a dead cert: It is definitely not lacking in experiences here!

So in the last four weeks I started to explore the surrounding Kansai-area – the cultural heart of Japan and old seat of power. By now I do not just know Suita, Osaka and Kyoto. I also know Nara, Kobe, Himeji and Uji.

Nara, the first permanent capital and cradle of Japan, is blessed with countless historical and religious important sights. But this passes easily out of mind because of the everywhere wandering at large deers – long time valid as holey messengers of god – which capture the full attention of many tourists. 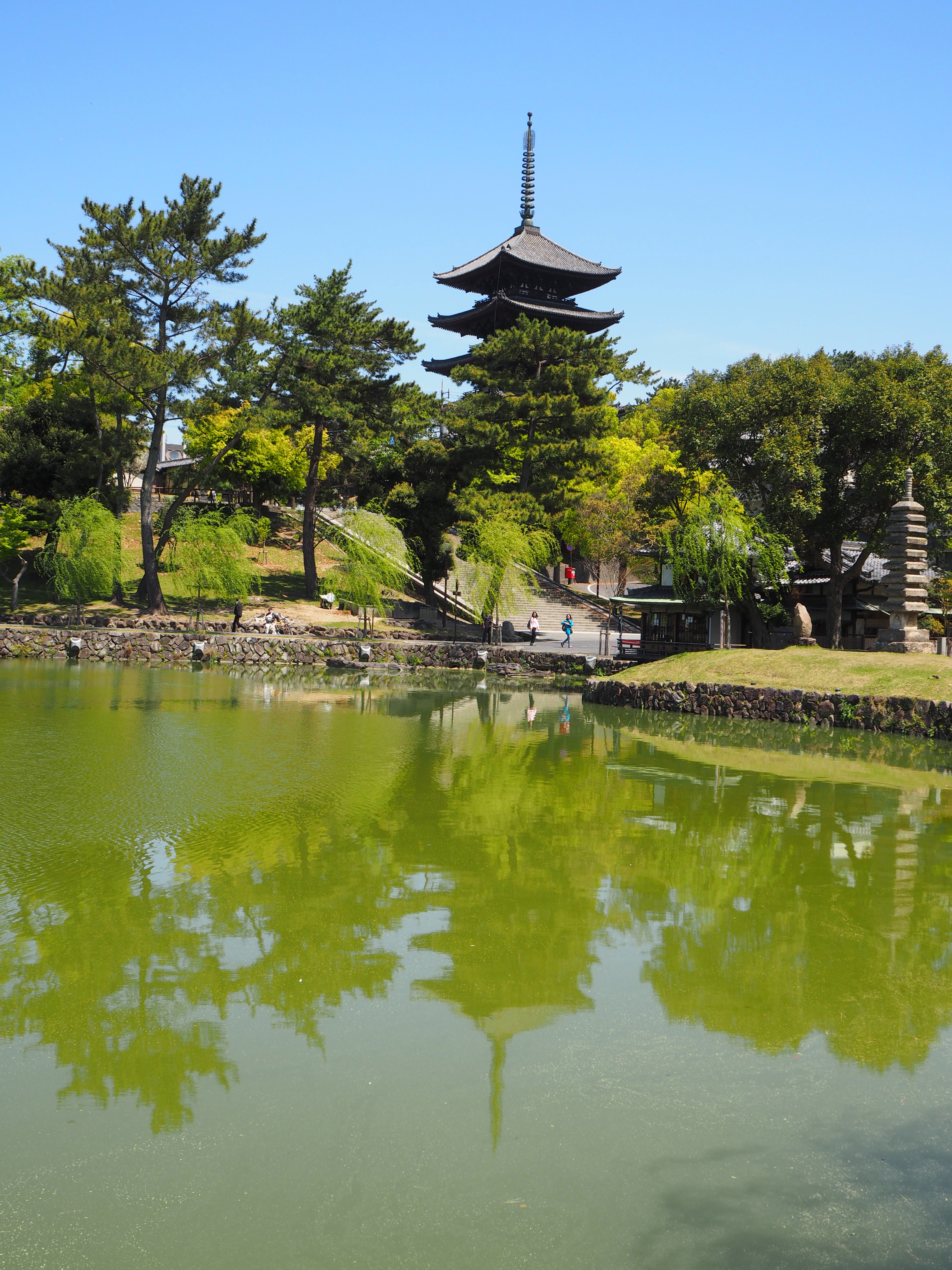 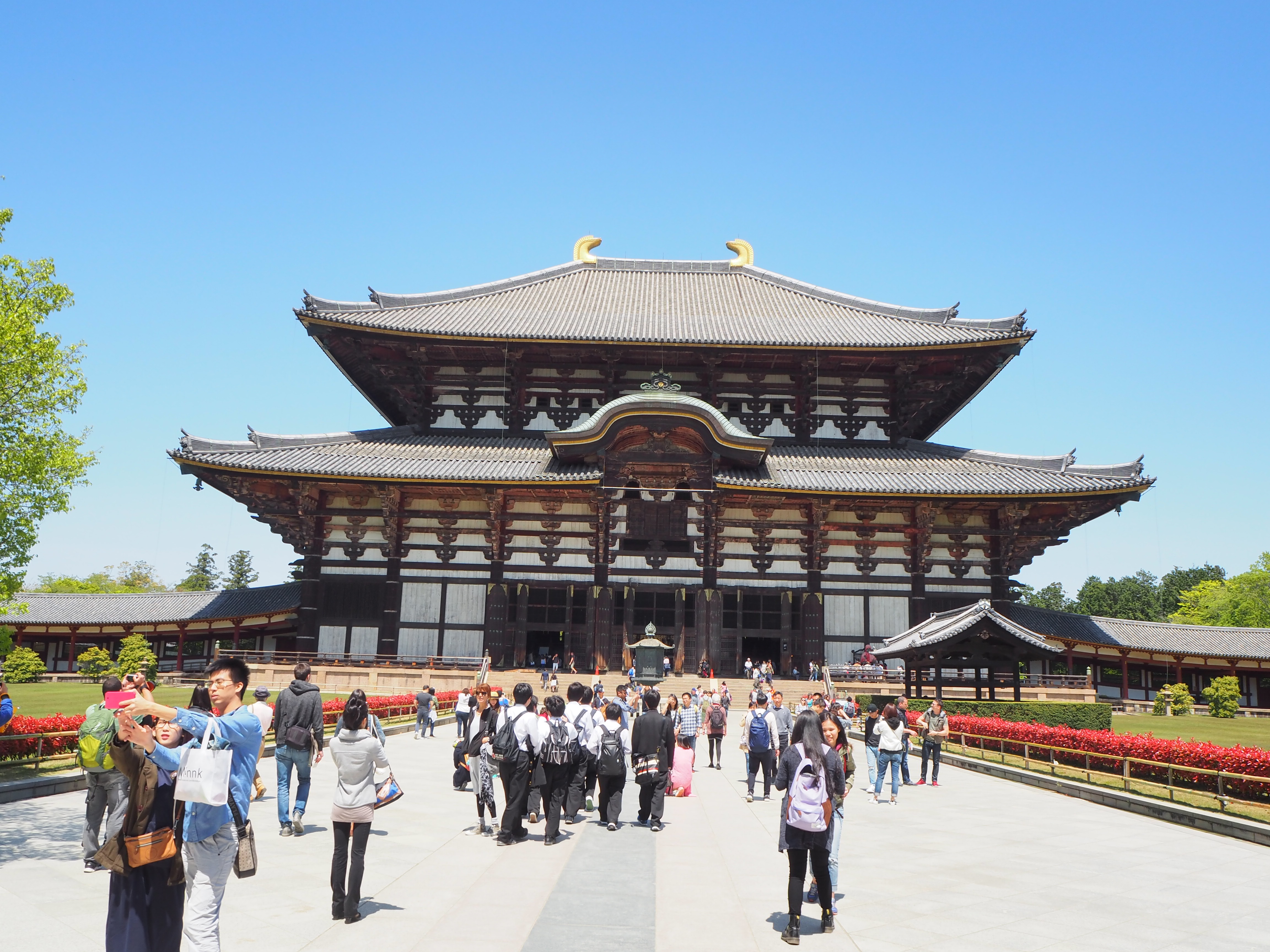 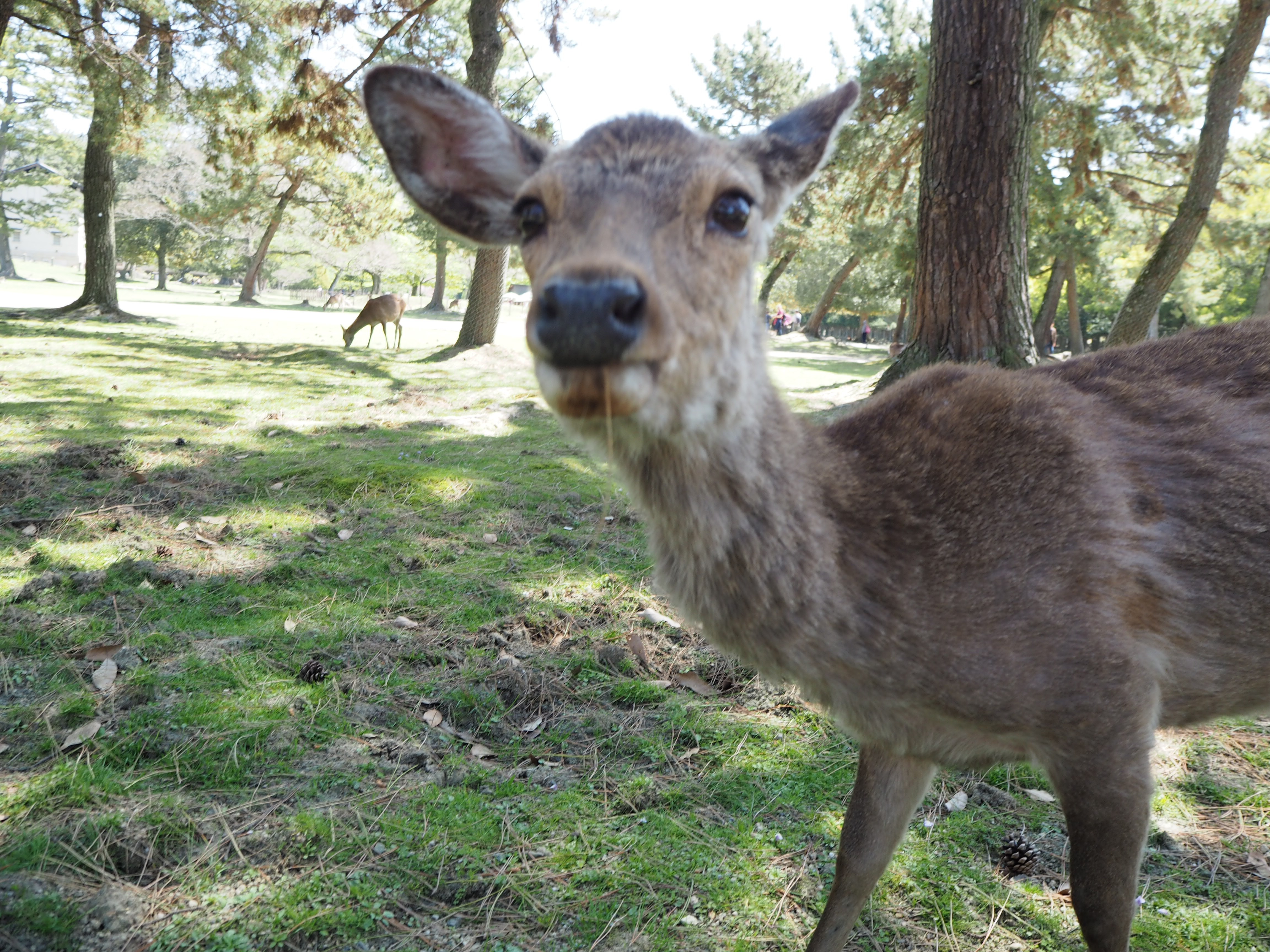 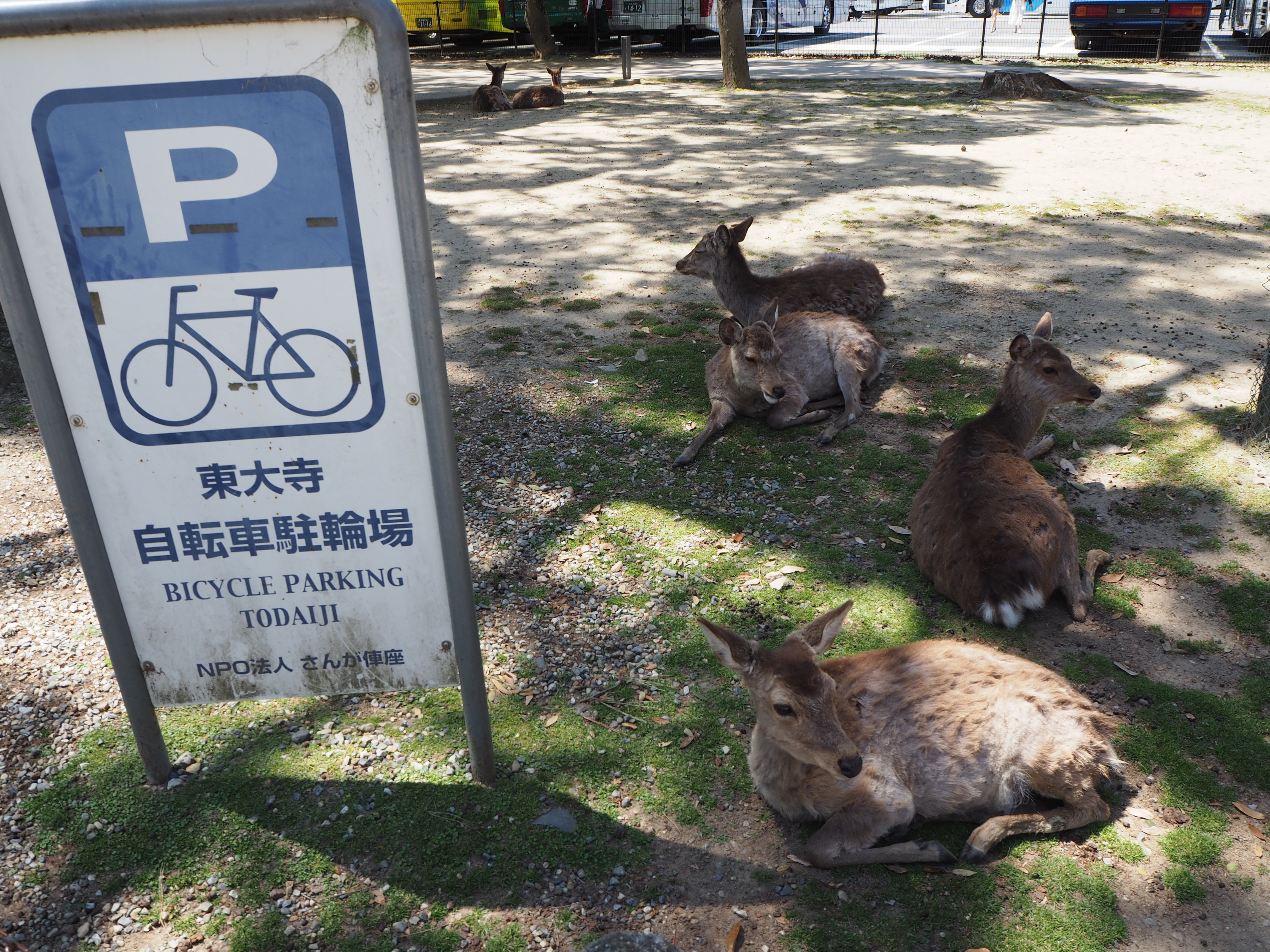 Even though the port city Kobe cannot provide the same level of cultural importance, it tempt with it international, exotic trait, which developed under the influence of seafarers and immigrants.

The also at the seaside located city Himeji is famous for its over the city enthroned, beautiful castle, which was considered to be impregnable and as a result survived nearly unscathed without any attacks until today. 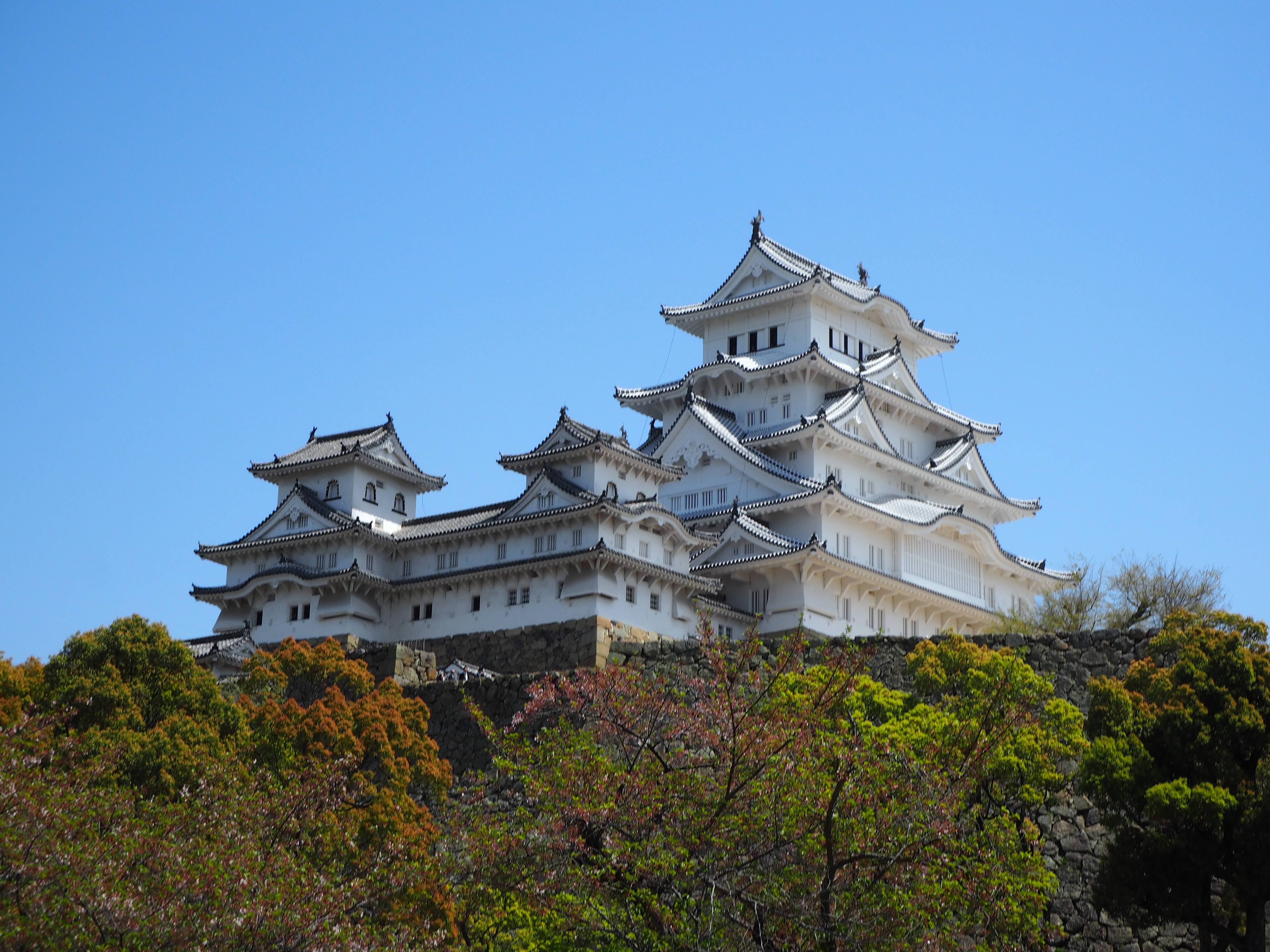 About Uji I can say: Even though it is a small city by comparison, it provides historical importance as major stopover between Kyoto and Nara because of its position at the Ujigawa. In Uji you can find beautiful temples, shrines, the probably oldest tea cultivation fields in Japan and nearly everything edible mixed up with Green Tea. 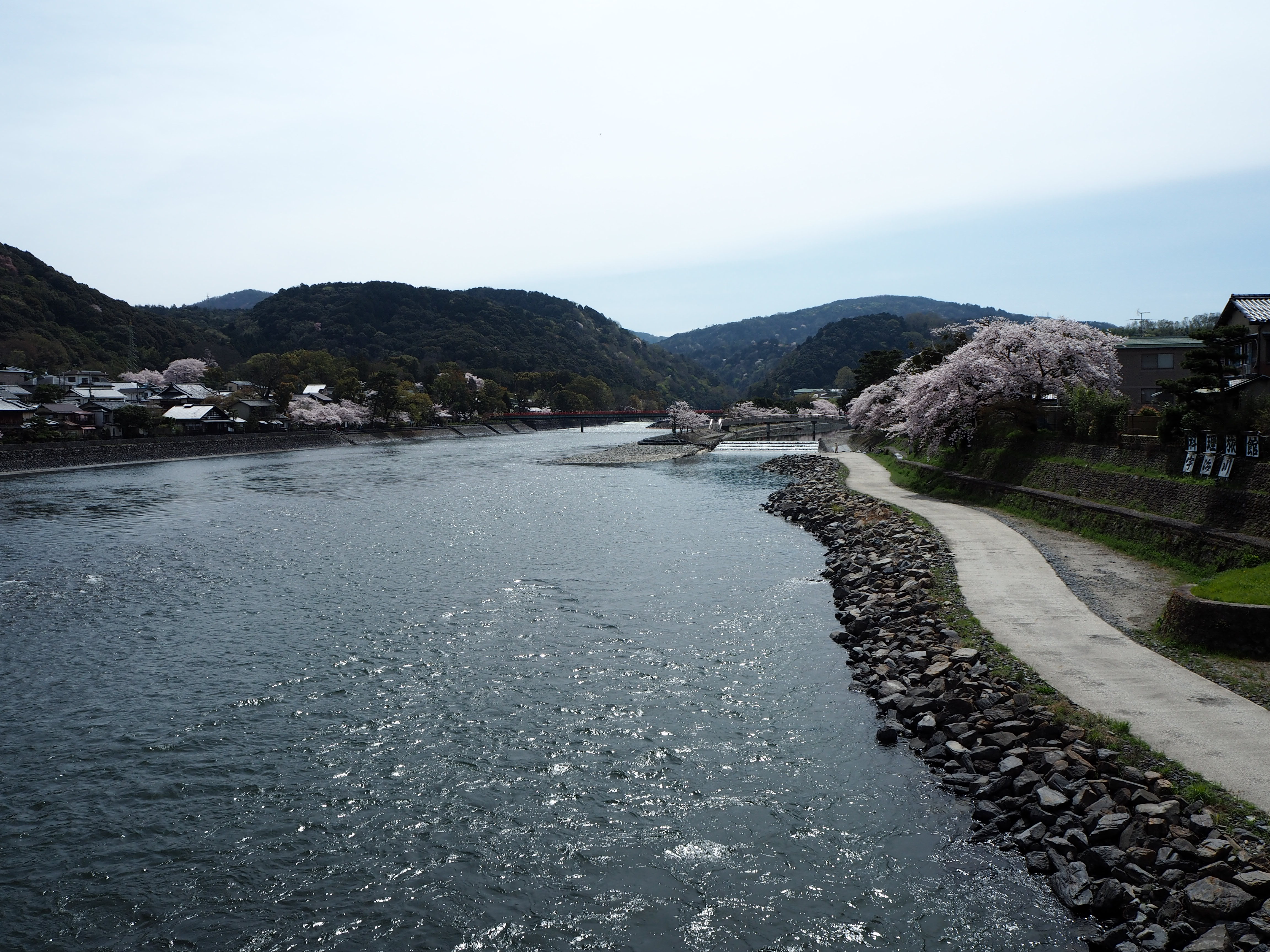 In order to understand Japan, I do not just go on sightseeing tours. I also give my best to learn the language, because it is the key to the people and shows much about the Japanese mentality. So I go three times the week to Japanese lessons in the „Suita International Friendship Association“. It is very interesting to learn, which differences the Japanese and German communication display and how they are reflected in the language. In the Japanese language there are for example countless polite forms, it is rather disrespectful to approach somebody with “you” instead of his or her name and before personal questions it is very common to excuse yourself for asking. In general “excuse me”,, “thank you” and “welcome” (at a shop) playing an important role, as well as the constantly indication, that you are listening and interested in what your dialogue partner is saying. Everybody speaks very indirect. “Yes” means often just “I am going to think about it”. You can see very good on this exemplary points, how important it is in Japan, that the others feel comfortable, that there is harmony.

But not just the language provided insights into the fascinating country Japan, also the Japanese art forms were very helpful. So I attended with great curiosity an Ikebana course. It was very interesting to see, that even in this form of expression, which was reserved for priests and aristocratic men in the past, the aspiration for harmony is central. With the background knowledge of the course I could see and understand the flower arrangements at an Ikebana exhibition in the Daikakuji temple, to which Mrs Okamoto took me warmly. 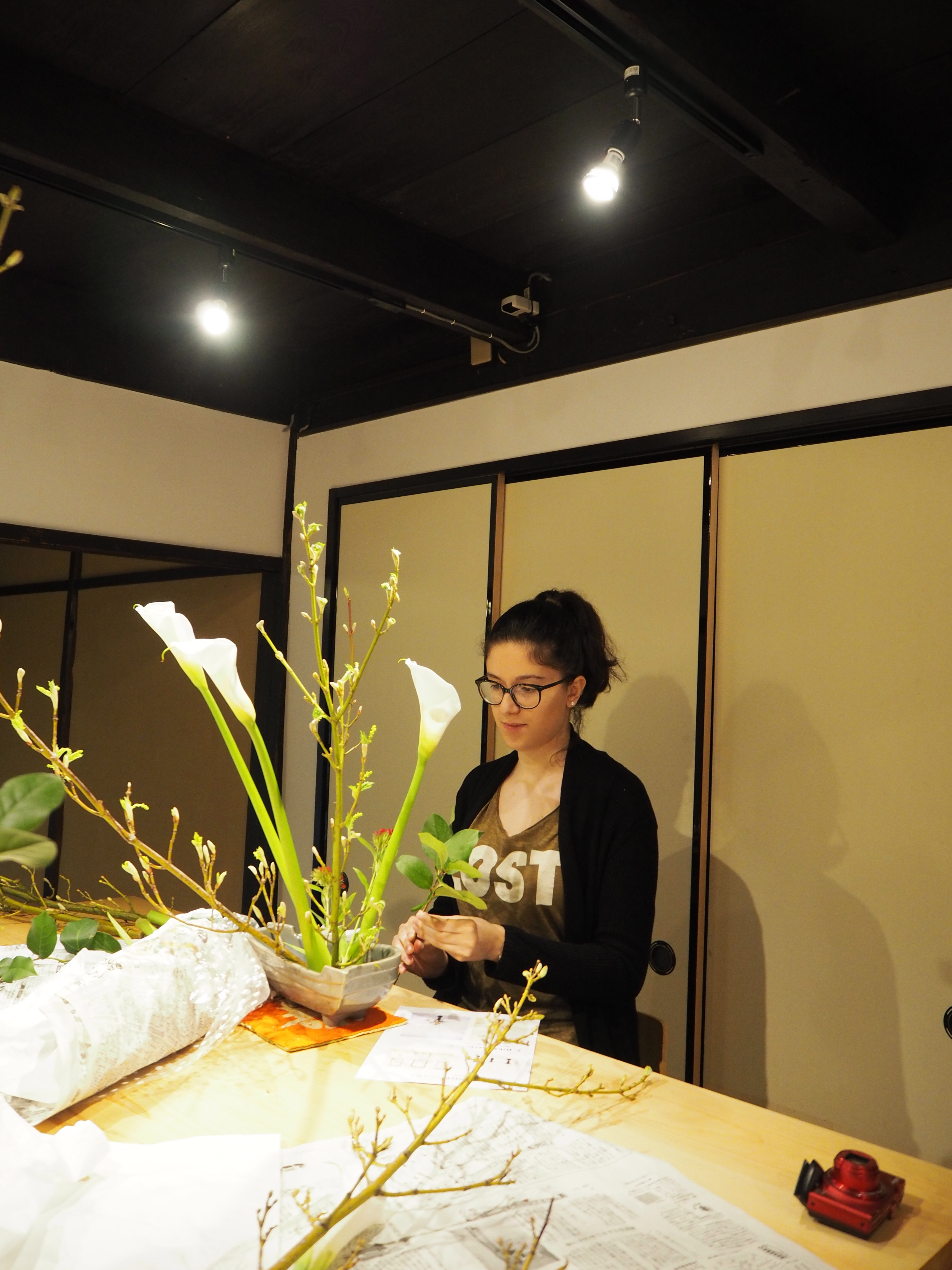 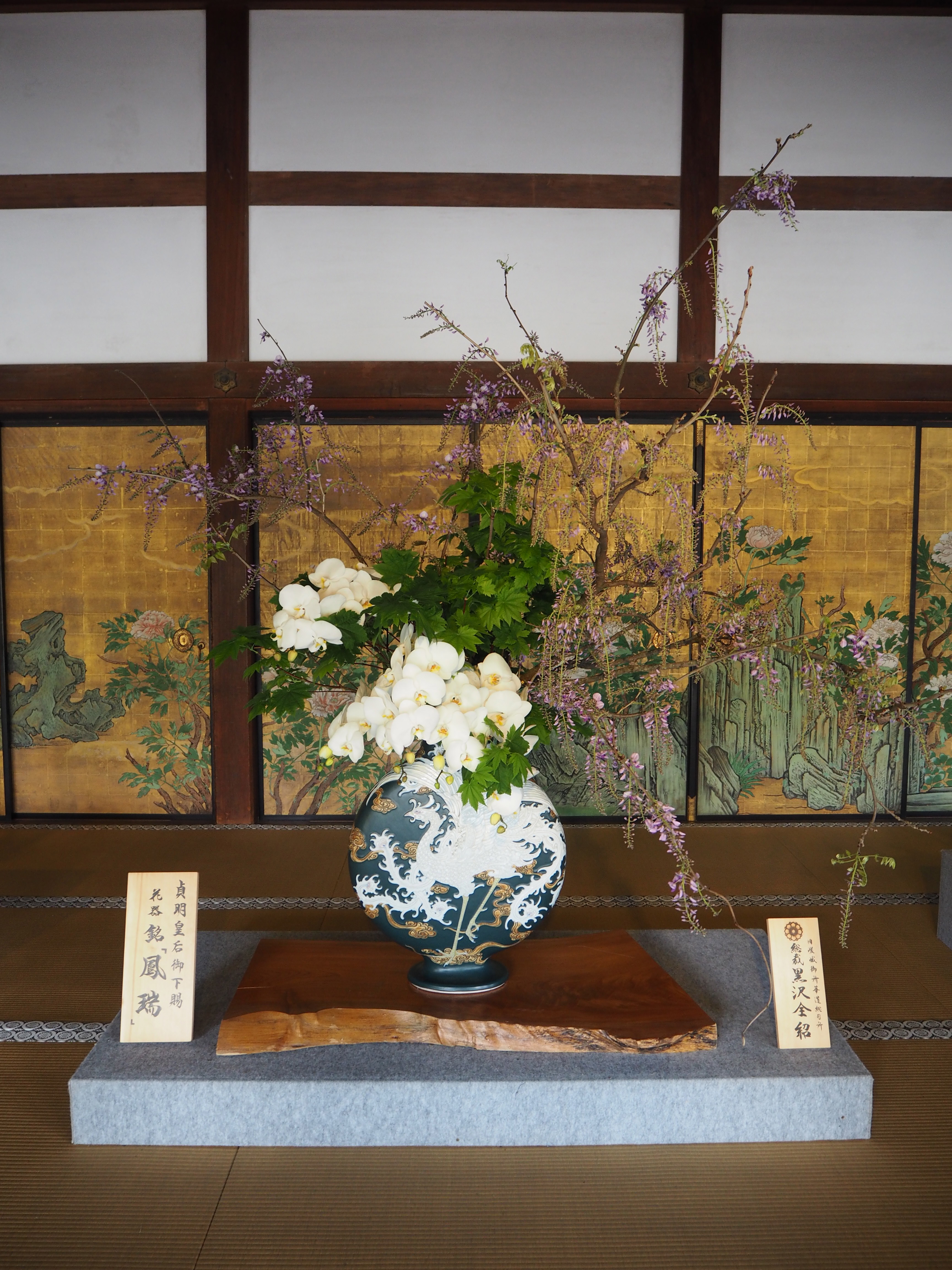 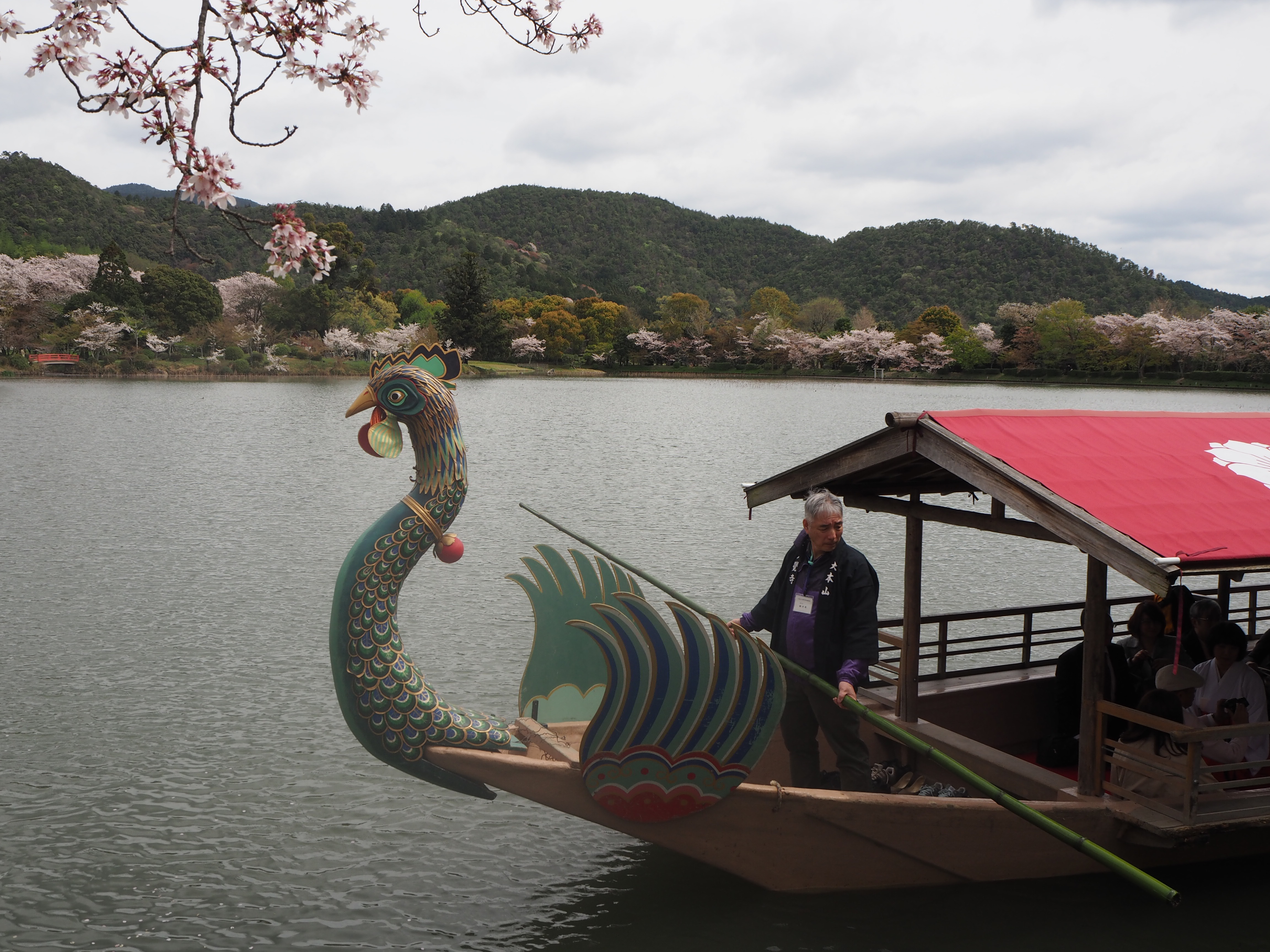 But Japan has much more to offer than just Ikebana. So I could also visit a show of the famous puppet play Bunraku, which is included in the Representative List of the Intangible Cultural Heritage of Humanity. In the most Bunraku plays is told a love story, which ends with a double suicide of the lovers as only escape to be together. This ending is perceived most of the times in Japan as very romantic and not as tragic. Maybe this mindset leaded amongst others to the highest suicide rate under women in 2007. But now more about the more pleasant art form Kyōgen, which could delight me, too. The aim of this also in the Representative List of the Intangible Cultural Heritage of Humanity included art form is to make the audience chuckle. 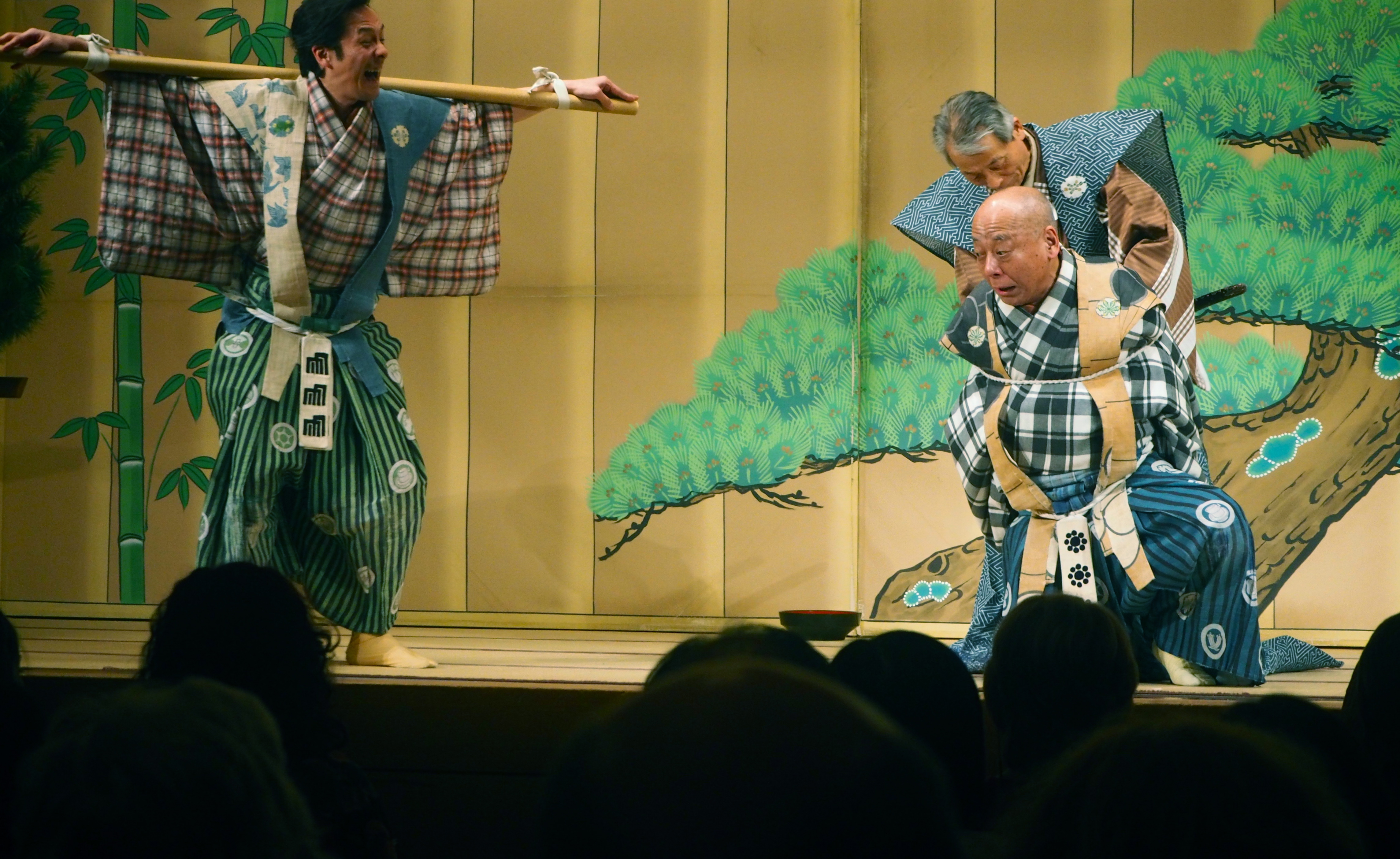 The Japanese art provides besides the performing arts also good music. Since 2009 the Representative List of the Intangible Cultural Heritage of Humanity also includes the court musical style Gagaku. After one show I have to say, the aesthetic concept of Gagaku is totally different from the western one. But if you open your mind, you can enjoy it. I like especially the traditional instrument Koto, a 13-stringed zither. At those shows, a small concert in Ibaraki and a phenomenal performance of Gustav Mahler’s symphony No. 9 in D-major (director Norichika Iimori), which I could attend thanks to Mr Fujimoto, I found out, that the Japanese also have gorgeous musical abilities.

In Japan I also experience, as you can see, a symbiosis and cross-fertilisation between the Japanese and German culture. For example during a tour in the Asahi brewery in Suita I was told, that the founder learned the art of brewing in Germany. More about the interaction between those to cultures I also heard during interesting conversations with in Germany interested Japanese and in Japan living Germans at regulars’ tables. Very informative regarding this was also the reception of the cherry blossom queen from Hamburg in Osaka. But I was especially pleased, that the German consul general, Dr. Ingo Karsten, despite his very full schedule book because of the current stay of Angela Merkel in Japan found the time to meet me. Furthermore could I meet Keiji Goto, the mayor of Suita, during very interesting conversations about Japan and Germany. In general I get to know here constantly new people at appointments from the foundation or in everyday life. Even though many Japanese are a bit diffident, the curiosity to learn something about another country is most of the times stronger. These contacts provide me the probably most valuable insight into Japan. So I want to mention two other occasions, at which I met very nice people: the Easter feast at Nobukos’, at which I learned more about the Christian minority in Japan and the Hanami of the Japanese-German society Kobe.

Mentionable is definitely also the daytrip of the Rotary Club Suita on the island Awaji, at which I could also establish contacts. Furthermore I was highly impressed by the exquisite menu. I had never before such fresh fish. I could notice at this trip as well as during a very amusing cooking evening, to which a friend took me, the importance of good food in Japan. Following numbers show this very evident: Germans spend 8% of there income on food, Japanese 25%. In Japan the quality of the ingredients plays an important role. It is common to eat many different small dishes, which are accurately served. A balanced, healthy and lean cooking is the Japanese very important. It is common to eat a lot of rice, fish and regional and seasonal vegetables, which are minimalist cooked or served raw, in order to lose as few nutrients as possible. Also in this area the Japanese aspiration for harmony is obvious. The concord with the nature is very important, as well as that everybody feels well, is healthy.

But even all aspiration for harmony cannot help, if a sudden release of energy in the Earth’s crust happens. So whole Japan held shocked its breath as it came to strong earthquakes in Kumamoto, during which many people died and received injuries. I want to finish now my report with the expressing my sincerest condolences to all the persons concerned and their dependents and my respect to everybody, who helps during the reconstructions. I wish everybody heartily the strength to ride this difficult situation out!